Working class resistance is back. There is a sharp shift in the political situation. The cost of living crisis is accelerating, with reports that energy bills could rise to £4,200 by January for the average household. But the increase in strikes has continued. Last week a national strike was declared by the CWU in Royal Mail, and we saw unofficial walkouts by construction and maintenance workers at the Grangemouth refinery and elsewhere. Saturday saw Aslef members who are train drivers walk out as part of national action.

Such action by workers comes in the context of multiple crises of the system - the pandemic, climate catastrophe, war, endemic entrenched racism, sexism and oppression. The last few years have been marked by mass street movements like that of BLM as well as a radicalisation and increasing generalisation about the system. Now strikes are part of working class resistance at a time when the Labour Party under Starmer is rushing to the right. It means there are big possibilities for revolutionary socialists.

There will be a joint union solidarity rally with RMT and ASLEF strikers on Saturday 20th August from 11 AM at the RMT picket at Oxford rail station.

As energy fat cats rake in billions, millions are forced into fuel poverty.  As profits and inflation rocket the working class is expected to tighten already tight belts.  Instead millions are rejecting the idea that working class should pay for yet another crisis, and tens of thousands are taking strike action to defend their wages, jobs, terms and conditions.  The upsurge in class struggle raises questions about how the struggle against collapsing living standards can turn into a challenge to the order of capitalist society and open the door to socialism.

24 August - Resisting the war on trans people
31 August - More than a moment - What did Black Lives Matter achieve?
7 September - Will Sunak/Truss end the Tory turmoil?
14 September - How Can Palestine be free?
21 September - Class struggle is back - why labour fails and revolution - launch of new SWP pamphlet
28 September - Is the media all powerful?
Titles may change subject to circumstances

Assemble 10 AM Bonn Square, Tuesday 23rd August (there are plans for similar events in Botley and Didcot later in the day - please contact us for details)

Please sign and share the statement of support for LGBT communities and opposition to the far right's attempts to divide us.

The far right groups like the Nazi Patriotic Alternative are trying to whip up hatred against the LGBT+ community in Oxfordshire.  They are attempting to intimidate parents and children who have booked to attend story-telling sessions at local libraries featuring drag queen Aida H Dee by picketing the libraries.

They have targetted Oxfordshire library events on 23rd August and their bigotry must not go unchallenged.

Drag Queen Story Hour is an international movement aimed at inspiring creativity and a love for stories in children. It aims to show the world that being different is not a bad thing, by providing imaginative role models for children to look up to. Aida H Dee has told the BBC her performances aimed at 3-11 year olds have no sexual language and explained Aida is supposed to be a positive LBGT+ role model for children.

At a time when a survey by “Just Like Us” showed that 55 per cent of LGBT+ 11- to 18-year-olds are anxious about their mental health on a daily basis (in comparison to 26 per cent of non-LGBT+ people) we welcome the attempts by local authorities to address this by hosting Drag Queen Story Hour, often as part of local Pride events.

We condemn the attempts by some on the far-right to foster the pernicious myth that drag is a kind of “child grooming” or in some way sexual, leading to accusations of paedophilia.

We remember how the Nazis sent 10-15 thousand men accused of homosexuality to concentration camps. We remember the bombing of the Admiral Duncan gay pub in London by a neo-nazi terrorist.

The far-right have always tried to associate the LGBT+ community with paedophilia while overlooking some very real scandals in the upper echelons of the church and government.

Their attempts are especially damaging at a time when transgender rights are under attack as part of culture wars, the government has backtracked on its proposal to ban transgender conversion therapy, and cutbacks are denying young people with gender dysphoria the support they need.

Therefore we encourage all groups and individuals irrespective of race colour or creed to stand firm against the bigots and support local counter-protests against attempts to shut down “Drag Queen Story Hour” and say fascists and bigots are not welcome in Oxfordshire on August 23rd.

There has been a fantastic response to our campaign to build opposition to the homophobic protest called by the Nazi Patriotic Alternative on August 23rd.

In Leeds 50 assorted Nazis and bigots were kept away for the council's LGBT diversity event by 250 supporters of Drag Queen Story Hour.  We want to do the same here in Oxford.

Can you help us to build the mobilisation?  Email contact@oxfordstanduptoracism.org.uk if you would like a supply of  leaflets and posters and if you can help with any of the activities below:

Sunday 21st August, Oxfordshire Welcomes DQSH Selfie day - send us your selfie pics and along with a message of support for DQSH.

Sunday 21st August, Oxfordshire Welcomes DQSH Selfie day - send us your selfie pics and along with a message of support for DQSH.

After the first planned deportation flight to offshore detention in Rwanda was stopped on 14 June under pressure of legal challenges and mass protest. On this day, the legal challenge to determine whether the Tories' Rwanda policy is lawful, led by Care4Calais and the PCS union, will be back in court on Monday 5 September,  the first day in a five day hearing.

A major protest outside the Royal Courts of Justice  go ahead on the day. This has been called by the TUC, Care4Calais and Stand Up To Racism and is backed by 12 trade unions, Refugee Council, Amnesty International UK, and a host of other refugee rights organisations, campaigns and faith groups.

In London: Stand Up To Racism, Care4Calais and TUC are asking on every local SUTR group, trade unions and supporting campaigns and individuals to bring delegations with banners to the Royal Courts of Justice (Strand), and to put out the call for volunteers to help with stewarding on the day.

Outside of London: SUTR, Care4Calais and the TUC are calling on calling on SUTR groups, unions and campaigns to take part with online, workplace and local actions. Use the #StopRwanda poster to take part and share online. if you would like to hep organise a local event please contact us

There is widespread support for the campaign, which got #StopRwanda trending at #3 on UK trends during the Twitterstorm on 19 July. Every SUTR group should be doing what it can in the coming weeks to draw in the broadest networks of contacts to mobilise for, and take part on, the day with evening protests in towns and cities outside London on Monday 5 September. Please make sure you add 'Stand Up To Racism' as a co host for any SUTR group's local protest, and contact info@standuptoracism.org.uk to volunteer or to find your nearest protest outside London. 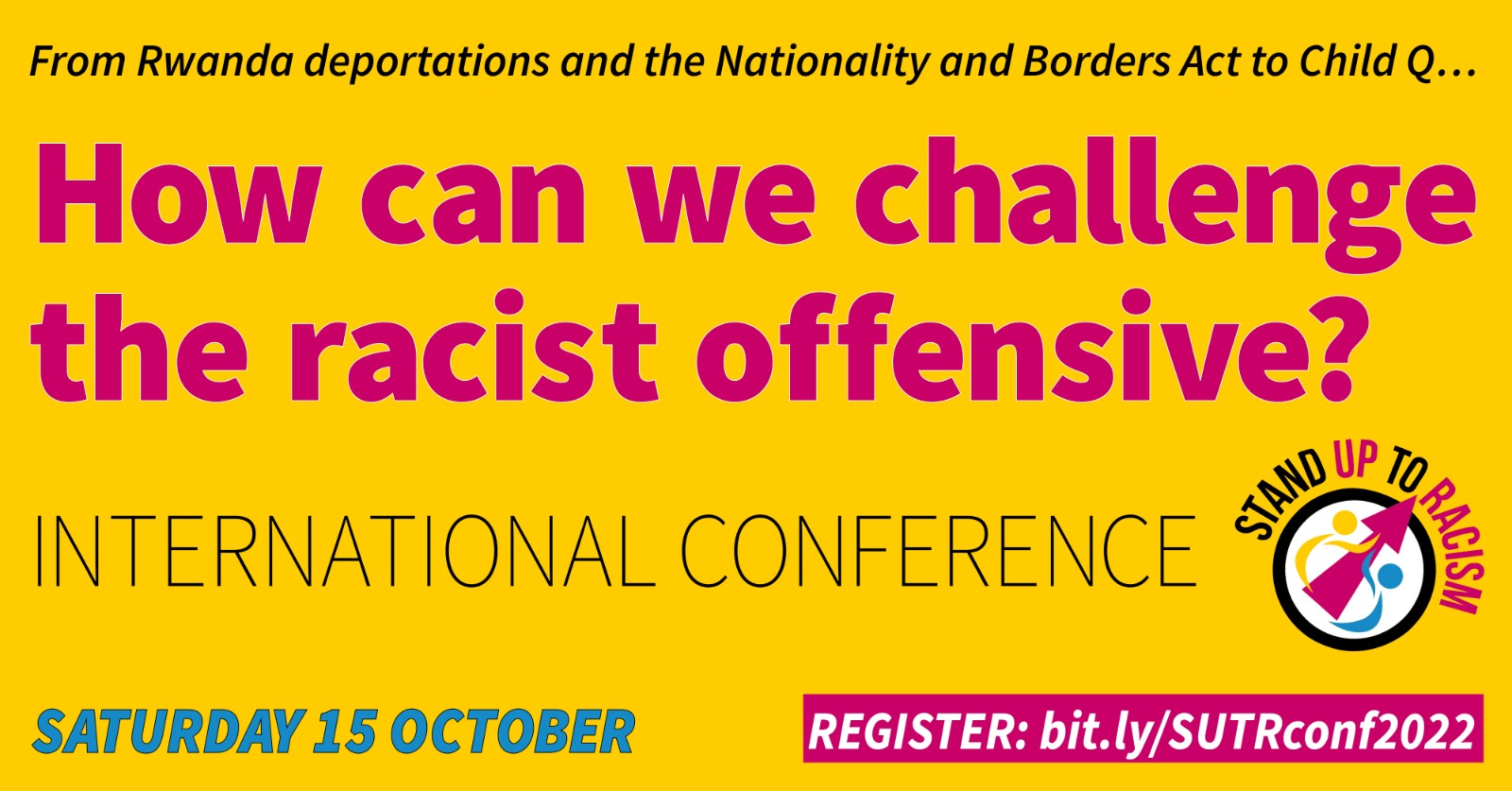 Stand Up To Racism International Conference

In Britain we are seeing a government determined to use scapegoating and divide and rule to deflect from political and economic crisis.

The Hostile Environment, the Rwanda Plan and the Nationality and Borders Act - which fundamentally attack the rights of refugees and threaten the nationality status of 6 million people - are fanning the flames of racism.

Immigration raids, deportations, denials of institutional racism and the use of Islamophobia are a daily reality.

Amidst the pandemic, increasing wars and climate chaos are leading to more refugees thrown into crisis, who then face racist hostile environments by governments when fleeing for their safety.

Internationally the rise of racism, Islamophobia and antisemitism goes alongside the growth of the racist and fascist right. The recent French presidential elections, where fascist Le Pen increased her vote and we saw a rise in the overall far right vote including support for Eric Zemmour, have come as yet another warning sign capturing the dangers when we don't mobilise a mass movement to oppose racism, the far right and fascism.

We have have to build resistance and fight to create a mass anti racist movement.